To share your memory on the wall of Alvin Millett, sign in using one of the following options:

Alvin Leroy Millett, 95, was born April 1, 1925, to Homer H. Millett and Marie Williams Millett in San Francisco, CA. Al’s family moved to Kern County to the Rio Bravo Pump Station when Al was 3 or 4. Al’s father, Homer, worked for Standard Oil Company for 40 years and his mother, Marie, was a homemaker. Al was the youngest of four children, two girls and two boys. He attended Kern County Union High School but left to join the United States Navy when he was 17.Al was stationed in the Pacific Theater in the New Hebrides, Guadacanal and Bougainville as an aviation mechanic keeping the planes flying for four years. He was featured in a Veterans Day CALIFORNIAN article on November 14, 2020. When Al returned from the service he married Imogene Mae Brown in 1946 in Las Vegas. They raised three children, two boys and one girl in their 66 year marriage. At first Al had a milk route with Peacock Dairy and then spent many years working for independent oil companies as a rig hand. He retired from Chevron Oil after 25 years. Even during his time working for oil companies, he and his sons, Frank and Martin, began raising cattle. They purchased a ranch in the
Granite Station area where the family continues its cattle ranching. Al was a hardworking, and patriotic man who was devoted to his wife and children. Providing for his family was his main goal in life. Al enjoyed trout fishing, digging for clams at Pismo and hunting deer in Utah. He enjoyed visits to Mammoth and South Lake Tahoe. His son, Frank, said his dad was a real character who enjoyed telling jokes and being a “cut up”. Al’s favorite saying was “God hates a coward.”

Al is predeceased by his parents, Homer and Marie, his brother, Richard E., and his sister,
Marilyn. Left to cherish his memory are his 98 year old sister, Jean, of Monterey, his sons,
Frank Homer Millett and Martin Leroy Millett (Sharon), all of the Granite Station area and his
daughter, Cheryl Ann Moore(Don) of Chowchilla, his grandchildren Brandon, Stephanie,
Lynsey, Cynthia, Janet, Jennifer, David, and ten great grandchildren.

There will be a graveside service for Al at Union Cemetery, 730 Potomac, Bakersfield, on
Wednesday, February 10, at 10:00 a.m. He will rest beside his wife, Imogene. For those
wishing to make a donation in Al’s memory, military organizations were always important to
him
Read Less

To send flowers to the family or plant a tree in memory of Alvin Millett, please visit our Heartfelt Sympathies Store.

There are no events scheduled. You can still show your support by sending flowers directly to the family, or planting a memorial tree in memory of Alvin Millett.
Visit the Heartfelt Sympathies Store

We encourage you to share your most beloved memories of Alvin here, so that the family and other loved ones can always see it. You can upload cherished photographs, or share your favorite stories, and can even comment on those shared by others. 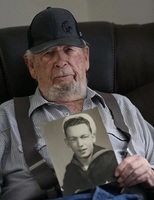